Lessons from the Collaery Case

Lessons from the Collaery Case 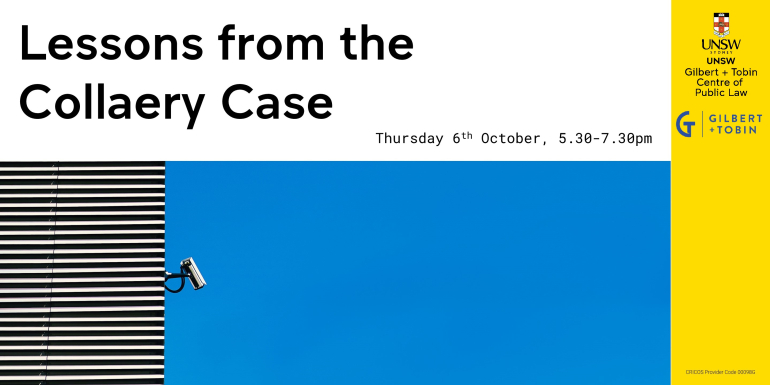 CLICK HERE to watch a recording of this event

In July this year, Attorney-General Mark Dreyfus exercised his power to discontinue the Commonwealth prosecution of Bernard Collaery, bringing an end to a complex, four year legal dispute. Collaery was charged in 2018 with conspiring with Witness K to communicate information or matter to the Government of Timor-Leste that was prepared by or on behalf of ASIS in connection with its functions or related to its performance of its functions, contrary to the Criminal Code (Cth) and the Intelligence Services Act 2001 (Cth). Collaery was also charged with communicating such information to ABC journalists in 2013. This prosecution has cast a critical light on Australia's secrecy laws and principles of open justice. This event will bring together a panel of those directly involved in the case, including Bernard Collaery, and the legal team of barristers and Gilbert + Tobin who defended Collaery, to discuss the case and its important implications for our legal system.

This hybrid event will take place in-person at Gilbert + Tobin, Level 35, Tower Two, International Towers Sydney, 200 Barangaroo Avenue, and online via Zoom. Drinks will be served from 5:30pm with the event commencing at 6pm. Please indicate if you are attending in person or via Zoom at checkout on the Evenbrite page.

Bernard Collaery heads a legal practice in Canberra, and was from 1989-1991 the Attorney-General of the ACT. Mr Collaery was charged in 2018 with breaching s. 39 of the Intelligence Services Act 2001 (Cth) by communicating ASIS information to ABC journalists, and with conspiring with “Witness K” to communicate ASIS information to the Government of Timor-Leste.

Gilbert + Tobin represented Bernard Collaery on a pro bono basis, with partners Dr Kate Harrison and Chris Flynn leading the team of solicitors working on the defence. Kate Harrison is a partner in G+T’s Dispute Resolution and Investigations group. Chris Flynn practices primarily in energy and resources, as well as public international law. Chris moved to White & Case as a partner during the case, but continued his commitment on the matter.

Phillip Boulten SC is one of Australia’s leading criminal barristers, with expertise in national security crimes. He appeared for Bernard Collaery at multiple hearings over the four years of the case, on a pro bono basis. His leadership of the legal team on criminal issues was integral to the defence.

Dr Chris Ward SC is a leading barrister with particular expertise in public and international law issues. He appeared throughout the proceedings for Mr Collaery on multiple occasions, acting on a pro bono basis.

The Honourable Gareth Evans AC is Distinguished Honorary Professor at the Australian National University. He served as Attorney-General and Foreign Minister (among other portfolios) during the Hawke and Keating Labor governments. He was a witness in the Collaery case supporting greater disclosure, providing multiple statements, appearing to give evidence, and being cross-examined.

Kieran Pender is a senior lawyer at the Human Rights Law Centre, an award-winning journalist and an honorary lecturer at the ANU College of Law. He was a vocal advocate against the prosecution of Bernard Collaery, providing extensive media comment and writing about the case for The Guardian, The Saturday Paper, The Sydney Morning Herald, The Age, Australian Book Review and Crikey. Kieran attended as many of the hearings as possible throughout the case and played an important role bringing the key issues to public attention and explaining the legal complexities.

The event will be opened by Professor Rosalind Dixon, Director of the Gilbert + Tobin Centre of Public Law at the University of New South Wales.